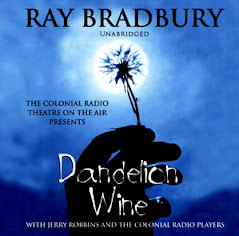 And I mentioned Peggy Webber's California Artists Radio Theatre, which also no longer has an official web presence. But you can read my review of one of their Bradbury productions, and this report on CART's production of Leviathan '99.

Posted by Phil at 8:00 am
Email ThisBlogThis!Share to TwitterShare to FacebookShare to Pinterest
Labels: Bradbury 100, Colonial Radio Theatre, podcast, radio