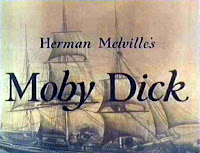 I have blogged before on the question of the Father Mapple sermon from the 1956 film Moby Dick. This, you may recall, is a feature film directed by John Huston, for which Ray Bradbury wrote the screenplay.

Bradbury had a protracted battle with Huston over the proper screenplay credit. Huston claimed a co-writing credit, Bradbury contested this. Bradbury won an adjudication in his favour from the Writer's Guild of America, but this was overturned on appeal, despite the lack of any new evidence to justify this.

Meanwhile, in occasional interviews, Orson Welles had been claiming that he wrote his Father Mapple speech himself. This wouldn't be unusual - he claimed to have re-written many of his film roles.

Bradbury's published version of the Moby Dick screenplay didn't shed much light on the issue. The version of the sermon published there didn't bear much resemblance at all to the version in the finished film. This COULD imply that Welles' claim was correct. Alternatively, it could simply indicate that the scene was shot from a later draft of the screenplay than the one Bradbury chose to publish.

However, I now have a clear solution to the matter.

Here's the scene as it appears in the film: 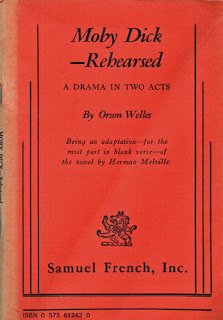 And here is the start of the Mapple speech: 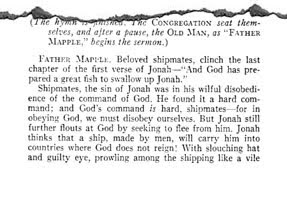 It might be argued that Welles' stage version of the speech is just a condensed, selective version of what Melville wrote, which indeed it is. You can do the comparison quite easily by reading the original Melville at Project Gutenberg.

What's important, though, is that the selections from Melville are almost identical in Moby Dick - Rehearsed and the released version of the film. The sermon even begins and ends at the same points, although one section from the play doesn't make it into the film.

My conclusion is that Welles did indeed write the script for the Mapple sermon used in Huston's film. Sorry, Orson, for ever doubting you...

Here's the full version of what Mapple says in Moby Dick - Rehearsed. Why not set the YouTube clip running, and compare it for yourself?

Beloved shipmates, clinch the last chapter of the first verse of Jonah - "And God has prepared a great fish to swallow up Jonah."

Shipmates, the sin of Jonah was in his wilful disobedience of the command of God. He found it a hard command; and God's command is hard, shipmates - for in obeying God, we must obey ourselves. But Jonah Still further flouts at God by seeking to flee from him. JOnah thinks that a ship, made by men, will carry him into countries where God does not reign! With slouching hat and guilty eye, prowling among the shipping like a vile burglar hastening to cross the seas, at last, after much dodgin search, he finds a ship receiving the last items of her cargo. As he steps aboard the sailors mark the stranger's evil eye...."Point out my state-room," says Jonah. "I'm travel-weary; I need sleep." ..."Ye looks it," says the Captain, "there's your room." ...All dressed and dusty as he is, Jonah throws himself into his berth.

He finds the ceiling almost resisting his forehead; the air is close, and Jonah gasps. In that contracted hole he feels the heralding presentiment of that stifling hour when the whale shall hold him in the smallest of his bowels' wards.

And now the time of tide is come; the ship, careening, glides to sea. ...But soon the sea rebels. It will not bear the wicked burden. A dreadful storm comes on; the ship is like to break, the bo'sum calls all hands to lighten her; boxes, bales and jars are clattering overboard; the wind is shrieking; the men are yelling. "I fear the Lord!" cries Jonah. "The God of Heavens who hath made the sea and the dry land!" -

Again the sailors mark him. The God-fugitive is now too plainly known. And wretched Jonah cries out to them to take him and cast him overboard, - for he knew that for his sake this dreadful tempest was upon them.

"And now behold Jonah taken up as an anchor and dropped into the sea" - into the yawning jaws awaiting him; and the whale shuts - to all his ivory teeh like so many white bolts upon his prison. Then Jonah prayed unto the Lord out of the fish's belly. But observe his prayer, shipmates. He doesn't weep and wail. He feels his punishment is just and leaves his deliverance to God.

Shipmates, sin not; but if ye do, take heed ye repent of it like Jonah.

And now - how gladly would I come down there and sit with you and listen while some one of you reads me the more awful lesson Jonah teaches me as a pilot of the living God. How, bidden by the Lord to preach unwelcome truths in the ears of the wicked, Jonah sought to escape his duty and his God by taking ship. But God is everywhere; and even "out of the belly of hell" God heard him when he cried. Then God spake unto the fish; and from the shuddering cold and blackness of the sea, the whale came breaching up to the sun, and "vomited out Jonah" upon the dry land; and Jonah - bruised and beaten - his ears, like two sea-shells, still multitudinously murmuring of the ocean - Jonah did the Almighty's bidding. And what was that, shipmates? - To preach the truth to the face of Falsehood!

Shipmates, woe to him who seeks to pour oil on the troubled waters when God has brewed 'em into a gale! - Who seeks to please rather than to appal! Yea, woe to him whose good name is more to him than goodness, and who - as the great Pilot Paul has it, - while preaching to others, is himself a castaway!

But oh, shipmates! Delight is to him - who, against the proud gods and commodores of this earth, stands forth, his own inexorable self! - who gives no quarter in the truth, and who destroys all sin though he poluck it out from under the robes of Senators and Judges! Delight - Top-gallant delight is to him who acknowledges no law or lord, but the Lord his God, and is only a patriot to Heaven. And eternal delight and deliciousness will be his, who, coming to lay him down can say - O Father! - mortal or immortal - here I die. I have striven to be Thine more than to be this world's, or mine own. Yet this is nothing; I leave eternity to Thee; for what is man that he should live out the lifetime of his God?