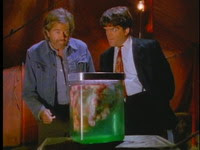 After blogging about "The Jar" the other day, I remembered that there were at least two more media versions of "The Jar" in existence - one for Bradbury's own TV series, and one for his own radio series.

The radio version, for Tales of the Bizarre, will be reviewed at a later date.
Posted by Phil at 10:24 am