Something Chilly This Way Comes

In Bradbury's novel Something Wicked This Way Comes, shortly after Cooger & Dark's Pandemonium Shadow Show arrives in Green Town, Charles Halloway's attention is caught by something in a shop window:

Halloway's eyes leaped to the poster on the inside of the window.
And back to the cold long block of ice.
It was such a block of ice as he remembered from travelling magician's shows when he was a boy, when the local ice company contributed a chunk of winter in which, for twelve hours on end, frost maidens lay embedded, on display while people watched and comedies toppled down the raw white screen and coming attractions came and went and at last the pale ladies slid forth all rimed, chipped free by perspiring sorcerers to be led off smiling into the dark behind the curtains.
THE MOST BEAUTIFUL WOMAN IN THE WORLD
And yet this vast chunk of wintry glass held nothing but frozen river water.
No. Not quite empty.
Halloway felt his heart pound one special time.
Within the huge winter gem was there not a special vacuum? a voluptuous hollow, a prolonged emptiness which undulated from tip to toe of the ice? and wasn't this vacuum, this emptiness waiting to be filled with summer flesh, was it not shaped somewhat like a. . .woman?
Yes.
The ice. And the lovely hollows, the horizontal flow of emptiness within the ice. The lovely nothingness. The exquisite flow of an invisible mermaid daring the ice to capture it.


I wonder if Bradbury might have been inspired by a real-life ice stunt which took place in Illinois (probably Bradbury's hometown of Waukegan) when he was ten years old: 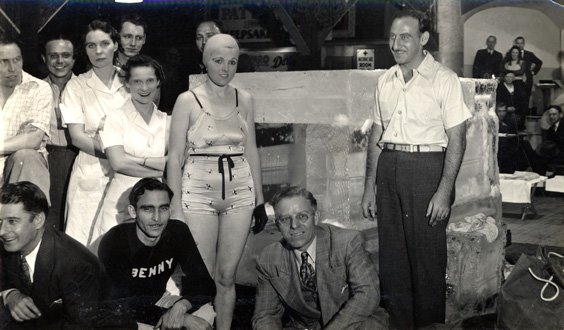 Email ThisBlogThis!Share to TwitterShare to FacebookShare to Pinterest
Labels: Something Wicked This Way Comes, Waukegan