In Chicago, Otherworld Theatre are staging various events in a Ray Bradbury Festival: several performances of Bradbury's own stage play version of Fahrenheit 451, a discussion panel featuring Mort Castle and others, radio drama and more.

Full details are here. Many thanks to Sara Livingston for alerting me to these events.


Meanwhile, in New York on Sunday there is a performance of selected songs from the new musical based on The Martian Chronicles. I have reported on this production previously (when it was being referred to as a sci-fi opera, two terms which have now been dropped as it was felt that they were giving a misleading impression). You can learn more about Sunday's event here, and more about the musical project here. Thanks to Daniel Levy for keeping me informed of developments with this ambitious project. 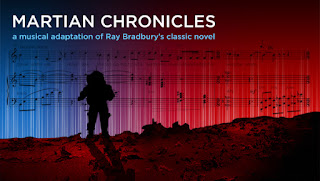