Ray Bradbury: From Science To The Supernatural 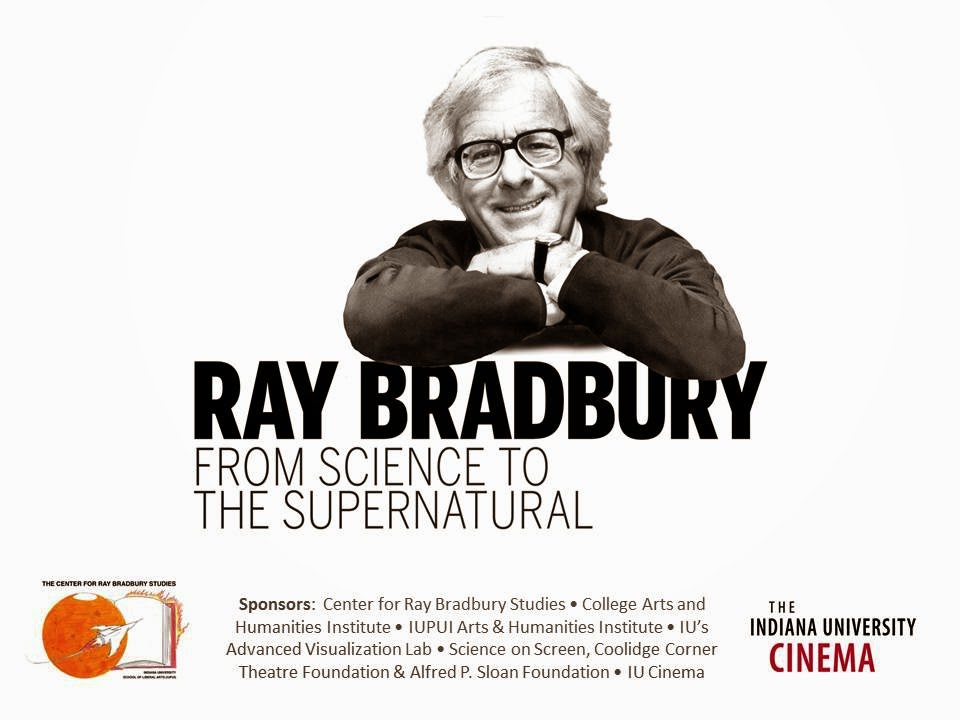 This week sees the start of the film event Ray Bradbury: From Science To The Supernatural, a week of screenings in Indiana of film and television works scripted by Ray, or based on his work.

The germ of the idea came a year ago, when Jon Eller - Director of the Center for Ray Bradbury Studies - was in discussion with Indiana University Cinema, headed by Jon Vickers. IU Cinema hosts major film events, including visits from luminaries such as Werner Herzog, Meryl Streep and Peter Weir.

When I visited the Bradbury Center in Indianapolis this time last year, Jon and I spent a bit of time bouncing around ideas for a Bradbury film series - and the result is From Science To The Supernatural.

But why that title?


We wanted to reflect the breadth of Bradbury's writing, presenting him not as "just" a science-fiction writer, or "just" a fantasist. At the same time, we were conscious of Ray's close association with space scientists - while not a "hard" SF writer, Ray's poetic vision of humankind's future in space made him a leading advocate of the American space programme. We wanted to acknowledge Ray's influence on a couple of generations of space visionaries, while also presenting some of the best adaptations of his work which, as it happens, tend to be at the more fantastic end of the spectrum.

Jon Eller and I both had some instant ideas of what to screen in our imagined ideal Ray Bradbury film festival, and we were partly influenced by the treasures held in the Center for Ray Bradbury Studies, which include Ray's personal 16mm and 35mm prints of some of his film and TV work. After bouncing around ideas, we gradually homed in on the selection in the current programme.

And so, when the series begins in IU Cinema on Tuesday 24 March, we shall be offering the following:

TV + Shorts:
It Came From Outer Space - the influential 1953 science fiction film (presented in 3D), from an original screen story by Bradbury, and directed by the legendary Jack Arnold.

Playhouse 90: A Sound of Different Drummers - a TV drama which borrows from Bradbury's Fahrenheit 451 (Bradbury sued over this, and won).

Something Wicked This Way Comes - the only major film to have been made of a Bradbury book from a Bradbury script during Ray's lifetime. This 1983 Disney film was directed by Bradbury's friend Jack Clayton, but friction between the two unfortunately brought their friendship to an untimely end.

If you happen to be in Bloomington, Indiana, during the coming week, grab yourself some free tickets to our screenings - detailed scheduling and ticket information are here:  http://www.cinema.indiana.edu/?post_type=series&p=8874

I will be blogging about the film event every day that we have a screening. Watch this space for more on Ray Bradbury: From Science To The Supernatural.

1. Ray didn't write the script for "The Jar" (he only wrote the original short story).

2. We thought "The Jar" would be too familiar, whereas "Juan Diaz" is less well known.

Good points. I'm sorry I won't be in Bloomington to enjoy the show!