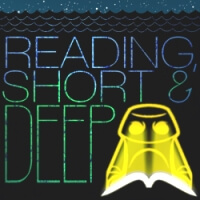 Reading, Short and Deep is a long-running podcast about short fiction. It's co-hosted by Jesse Willis and the noted science fiction scholar Eric Rabkin, and in each episode they pick a single short story to discuss. They usually also provide an online link, so that you can read the story under discussion.

I met Eric at a couple of conferences in the last decade, and had the honour of writing a chapter for a book he co-edited, Visions of Mars (McFarland, 2011).

Given Eric's background, its perhaps no surprise that a good number of episodes discuss works of fantasy and SF, including stories by Jack London, Clark Ashton Smith, Shirley Jackson and Robert Sheckley.

And, of course, Ray Bradbury.

Here are direct links to the Bradbury episodes (although you can also subscribe to the podcast on any podcast app):

The Pendulum (Bradbury with Henry Hasse)