This is the sixth in my series of Lockdown Choices, where I seek to entertain you while in coronavirus-isolation, and remind you of Bradbury's great works in this, his centenary year.

In these posts, I cover each of Ray Bradbury's books, say something about the contents, then pick the best stories and adaptations.


Lockdown Choice #6: Switch on the Night

Switch on the Night (1955) was Ray Bradbury's shortest book to date. It contains just a single story, and runs to about fifty pages. This is because it is an illustrated book for children. Yes, the author who started out in Weird Tales scaring the bejeezus out of us with visceral horrors such as "Skeleton" and existential angst in "The Crowd" and "The Wind", has by now turned into a children's author! Well, if it's good enough for Roald Dahl...

From a biographical point of view, there is a clue as to how this shift occurred, right there on the dedication page:


Susan and Ramona were Ray's first two daughters, and Susan happened to be scared of the dark. And so Bradbury devised a story to counter this fear. According to Sam Weller's The Bradbury Chronicles (p.236), Bradbury shipped the book around various publishers for six years before, finally, Pantheon (Random House) picked it up. And I have seen a colour photocopy of the original 1949 manuscript (in the Center for Ray Bradbury Studies, Indianapolis) which shows that Ray always intended it to be an illustrated book. The manuscript has primitive colour images, presumably created by Bradbury himself.

The book was illustrated throughout by Madeleine Gekiere, the Swiss-born American artist, writer and filmmaker, whose previous work for children's books had been recognised by the New York Times. According to an obituary in the New York Post (July 2, 2014), Bradbury shared the royalties from the book with Gekiere - something that she said was unheard of: "I never got any royalties on my other books [...b]ut Ray Bradbury, no problem, he shared the profits . . . Just a very nice man.” Gekiere alas commited suicide in 2014.

The Gekiere version of the book stayed in print for a number of years, with the last reissue being a library edition issued in 1963.

Perhaps more familiar today, though, is the version first published in 1993, with illustrations by the phenomenal Diane and Leo Dillon.

What's curious about this is to see two different visual interpretations of the same text - although Bradbury's text has also been published a number of times with minimal illustration, such as in the 1990 Oxford Book of Story Poems.

There's just a single story here: of a little boy who likes light and hates darkness. He dislikes switches, we are told, because they turn off the light. He won't go out in the dark, but stays lonely in his room surrounded by candles and torches. 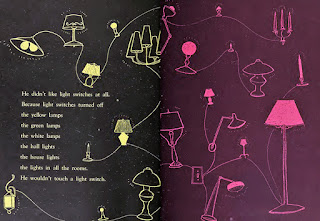 One night, wandering around the house, the boy spies a curious figure: a little girl who introduces herself as "Dark". She explains the wonders of darkness, and how switches actually work differently to how the boy sees it. When you flick a lightswitch off, you are turning on the night; you can switch on the stars, the crickets, and the frogs. 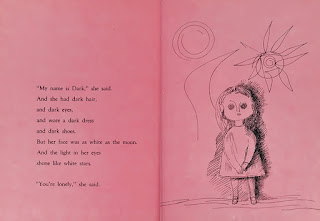 With this new understanding, the boy can now marvel at the darkness.

Naturally, this is a very slight tale, and designed to be read to (or with) a small child. But we can still see some Bradbury hallmarks here. The most obvious, perhaps, is the poetic way with words. From the layout of the words on the page, you may even wonder if this is a story or a poem. (Who can say? Which is why it was included in the Oxford Book of Story Poems, I imagine...)

Then there is the twist: that reversal of point of view, which allows the boy (and the reader) to see a single phenomenon from a totally different angle. This is characteristic of early and middle Bradbury. Remember "The Million-Year Picnic", where the humans are the Martians now?

And finally there is "Dark". She reminds me of Clarisse in Fahrenheit 451: a young but worldly-wise catalyst who brings about a change in another character. (Except for her name, dark hair, dark eyes, dark clothes and dark shoes. All of those remind me of Mr Dark from Something Wicked This Way Comes - but oh look, I've jumped the timeline; that book hasn't been written yet...)

As far as I'm aware (and believe me, I do a lot of digging for this sort of thing), there has only ever been one official media adaptation of Switch on the Night. And that was simply a reading with some atmospheric sounds and music, as part of a BBC radio series called White Nights (July 2006).

Read about the remarkable career of artist Madeleine Gekiere, here.

Learn about the extraordinary range of titles illustrated by the Dillons, here.

Switch on the Night is a lovely piece of writing to be read aloud, and so you will find some (usually unauthorised) readings online. There's a charming one here.

The next of my Lockdown Choices will be Bradbury's seventh book: The October Country.
Posted by Phil at 12:40 pm

Email ThisBlogThis!Share to TwitterShare to FacebookShare to Pinterest
Labels: Gekiere, Leo and Diane Dillon, Lockdown choices, Switch on the Night