If you've been following my Lockdown series of posts, you'll know that I like to give background information on Ray's books: how they came to be written and edited. And you might be wondering where I get my information from. Well, here are the answers...

Actually, most of it is in my head, and I simply type it out - and then go fact-checking to make sure I haven't made any mistakes. But how did it get in my head in the first place? I have a number of go-to books, and these are where I have learned most about Bradbury over the years.

The first of these is the magnificent Ray Bradbury: the Life of Fiction, written by the masterful Bradbury scholars Jon Eller and the late Bill Touponce. It's really two books in one, reflecting the authorship of the book, and the specialisms of Jon and Bill. They goes through each of Ray's major works and give you (a) a history of how the book was originally composed, including roads-not-travelled; and (b) a lit.-crit. analysis of each of those works. The history sections are generally the work of Jon Eller, and the lit.-crit. sections are generally by Bill Touponce - although the two did help each other with the revisions of their respective sections. 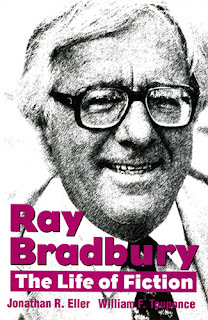 The reason I find this book so fascinating is that it really uncovers Bradbury's writing process. It's a process of writing, re-writing, and more re-writing. And this is precisely why Bradbury's books tend to be a bit fluid over time, with (for example) various editions of The Martian Chronicles having slightly different contents. And why you will often see the same idea popping up in different works over many years.

My own original research into Bradbury has usually focused on Ray's writing and re-writing in media (film scripts, plays, radio plays etc), and it was amazing to find that Eller & Touponce had uncovered similar quirks in Bradbury's prose fiction as I was finding in his screenwriting. Over the last decade or so, I've had the good fortune of working quite closely with Jon Eller, and there's no doubt that his understanding of Bradbury has rubbed off on me. We both have a fascination with archive materials, and how we can re-construct a sequence of events from a set of archival clues. I was also lucky enough to meet and work with Bill Touponce on a couple of projects, but his approach and mine are very different. Although I admire Bill's analytical and theory-infused writing, it's a form and style that I would struggle to achieve (and usually seek to avoid) in my own writing.

My second go-to book is the profusely illustrated Ray Bradbury: an Illustrated Life by the late Jerry Weist. This is a glorious coffee-table book full of cover art and interior art from nearly all of Ray's career. But it also includes draft artwork, both from the cover artists (especially Joe Mugnaini) and from Ray himself. I'll bet you didn't know that many of Ray's book covers were from Ray's own concepts. 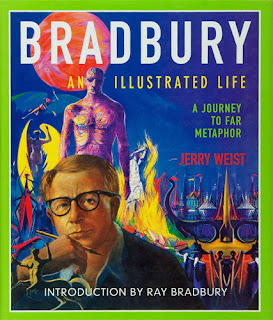 Third is Sam Weller's authorised biography of Ray, The Bradbury Chronicles. It's quite well researched and written in a breezy style. You'll be amazed how quickly Ray's long life flies by as you work through this volume. My only real problem with it as a reference book is that the index is quite inaccurate. Many a time I've looked something up in the index and found that the page references are wrong. I'm not sure what went wrong here. (The ebook version has an obvious advantage, in that you can ignore the index and just do a straight text search.) There are also a couple of instances where Weller reports something that Ray has told him, but hasn't done the follow-up fact-checking that I would expect in a book which generally appears to be well-researched. The case of "the Lonely One" is a particular example which I have discussed before. 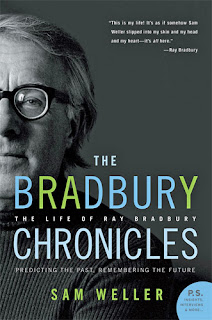 Finally, not a book but a whole series of books. Starting with Becoming Ray Bradbury, Jon Eller has produced a trilogy of biographical volumes about Ray and his work. It's sometimes been referred to as a biography of a mind, since it focuses on Ray's developing intellect throughout his career. And since Eller is a meticulous researcher (and the series is published by an academic press), everything is thoroughly referenced and cross-referenced. The third volume, Bradbury Beyond Apollo, is due out later this year, and it traces Ray's evolution through the "space age" and beyond. You'll get to find out how Ray went from being something of an outsider to the science-fiction field to being a spokesman for the genre - and a lauded consultant on anything to do with space and planetary research. 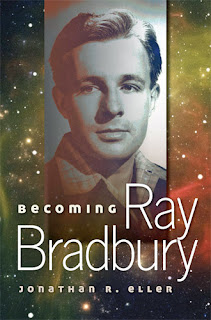 What you won't find a book on is Bradbury's media work - and that's precisely why this Bradburymedia website exists. It was always my aim to focus on this much un-researched area of Ray's activities. So if you're wondering where I get all my film, radio and television-related information from, the answer is: my own research. I've had to dig into archives and find primary sources to track Ray's development as a screenwriter. And I've had a lot of fun doing it!
Posted by Phil at 2:34 pm

Thanks, Phil. Rest assured that, while not often stopping by to comment, there are many of us out here reading and enjoying these posts.