This is the seventh in a new series of posts, my Lockdown Choices, where I seek to entertain you while in coronavirus-isolation, and remind you of Bradbury's great works in this, his centenary year.
In these posts, I cover each of Ray Bradbury's books, say something about the contents, then pick the best stories and adaptations.

The October Country was Ray Bradbury's seventh book, published by Ballantine in (appropriately enough) October of 1955. It contained nineteen stories, fifteen of them reprinted from his earlier book  Dark Carnival (1947). In fact, the project originated as a simple re-packaging and re-arrangement of Dark Carnival, once Arkham house had relinquished rights to the book. It was Bradbury's Ballantine editor Stanley Kaufmann who realised the revised contents of the book were drifting a long way from the original, and suggested a new title would be in order (see Eller & Touponce, Ray Bradbury: the Life of Fiction, pp. 77-79).

This was the first of many re-shuffled playlists of Bradbury's short-story-collection career, and so it's worth just spelling out how it compares to Dark Carnival: 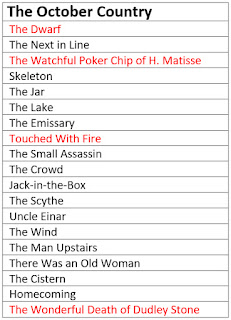 The stories in black are carried over, and the ones in red are new to The October Country. Also new is the "the" in front of "Cistern", perhaps stolen from "The Homecoming", which no longer has a "the"!

And missing from the original Dark Carnival line-up are: "The Maiden", "The Tombstone", "The Smiling People", "The Traveler", "Reunion", "The Handler", "The Coffin", "Interim", "Let's Play Poison", "The Night", "The Dead Man", and "The Night Sets". But most of these would re-surface in future collections, so Bradbury was presumably still happy with them. (Four of them would never re-appear in a Bradbury collection, though: "The Maiden", "Reunion", "Interim", and "The Night Sets". My thanks to Piet Nel for pointing this out.)

As with his earlier book The Ilustrated Man, Bradbury initially considered something of a framing narrative to tie the disparate short stories together, but went instead for a two-page scene presenting a dialogue between a grandfather and grandson. He later trimmed this down to his simple "definition" of the concept as it appears in the finished book:

...that country where it is always turning late in the year. That country where the hills are fog and the rivers are mist; where noons go quickly, dusks and twilights linger, and mid-nights stay. That country composed in the main of cellars, sub-cellars, coal-bins, closets, attics, and pantries faced away from the sun. That country whose people are autumn people, thinking only autumn thoughts. Whose people passing at night on the empty walks sound like rain...

This passage reminds me very much of an introduction to a TV anthology series, and it's surprising in a way that nobody ever developed such a concept from the book - especially since The October Country contains some of Bradbury's most frequently-adapted stories.

As with another earlier book The Golden Apples of the Sun, Bradbury wanted to include illustrations by Joe Mugnaini, and so some (but not all of the stories) appeared with Mugnaini's by now familiar line drawings. In Golden Apples, the drawings were half-page images at the head of each story, and became inextricably linked to the story for the reader. In The October Country, however, the illustrations were allowed a full page each, sometimes before the story, and sometimes within the story; almost randomly distributed, and with some stories remaining completely unillustrated.


The October Country picked up some good reviews. The UK edition won approval from The Guardian reviewer Norman Shrapnel, who declared that Bradbury's stories had "the subtlety of a hypodermic syringe". (I'm still trying to figure out whether that's a good thing or a bad thing.) Meanwhile another British reviewer for The Observer lamented that Bradbury had been "classed with the science fiction writers". Because, you know, he was good, unlike those sci-fi fellows...


I made a Bradbury 101 video about The October Country, in which I give an overview of how Dark Carnival was re-worked, demonstrating that part of Bradbury's method was his tendency to re-write:

When I covered Dark Carnival, I singled out a few stories which re-appear here - namely "Skeleton", "The Crowd", "The Scythe", "The Lake". So here I will pick just from those which are new to The October Country.


"The Dwarf" - this was one of my early favourite Bradbury stories, The October Country being only the second Bradbury book I ever read. The story is simultaneously funny, sad and frightening. The basic premise is about a little man (the dwarf of the title) who goes into a hall of mirrors to see himself distorted to full stature. It's not exactly politically correct when stated like that, and in truth the story might find difficulty getting published today. But what makes the story so terrific is that the dwarf is also a writer who has written a story about being both a dwarf and a murderer; and he is effectively tortured by the main characters in the story. I'm not doing it justice here - you really need to read it. But it's an effective series of twists and distortions, and through Bradbury's skill you will by turns be horrified by the dwarf and feel sorry for him.


"Touched with Fire" - this story has a simple premise: "More murders are committed at ninety-two degrees Fahrenheit than at any other temperature." Any warmer, and it's too hot to move; any cooler, and cooler heads prevail. What makes this story so charming is the way it's framed. The main action involves the hotheaded Mrs Shrike:


The woman [...] stood at a wall phone, saliva flying from her mouth at an incredible rate. She showed off all of her large white teeth, chunking off her monologue, nostrils flared, a vein in her wet forehead ridged up, pumping, her free hand flexing and unflexing itself. Her eyes were clenched shut as she yelled [...]

But the story is told through the frame of Mr Foxe and Mr Shaw, who set out to verify the hypothesis of 92-degree murders. They have targeted Mrs Shrike as she seems a likely murderer...

I decided when I started this series of blog posts that I would talk about my favourite stories. And of the four new stories in this volume, these are the only two that I could count as favourites. There are some elements of "Dudley Stone" which impress me, but overall I have little time for that story. And I'm afraid "The Watchful Poker Chip" remains one of my least favourite Bradbury stories. So I'll say no more about them.

The October Country, being just a collection of short stories with no linking narrative, doesn't lend itself to being adapted as a whole book. But it has been done - as radio drama - twice. Sort of.

ABC Radio's Halloween 1984: The October Country was a ninety-minute live broadcast from the Directors' Guild Theater in Los Angeles, performed before an audience. It wove together four of the book's stories ("Emissary", "There Was An Old Woman", "The Next in Line" and "The Wonderful Death of Dudley Stone") into a, er, strange assemblage. Most of the individual stories were told reasonably well, and with a decent cast which included June Lockhart, Lynn Redgrave, and voice-acting legends Casey Kasem and Gary Owens. But "The Next in Line" - set by Bradbury in the Mexican town of Guanajuato, famous for its mummies and catacombs - is inexplicably relocated to Jamaica. And "Dudley Stone" for some reason becomes the author of all these stories, as the production makes "solving the mystery of Dudley Stone" into the overarching plot of the whole thing. I feel sorry for Bradbury, who had to sit in the audience through this whole production, and was then hurried into an unplanned interview when the show ran short. Bradbury explains the origin of each of the stories, politely pointing out that "The Next in Line" was based on a real experience he had in Mexico, not Jamaica...

In 2009, Peggy Webber's California Artists Radio Theatre did a better job, with a cast including Beverley Garland and William Windom. No framing or linking story, just a single ninety-minute production which tackled several of the best stories from the book: "Skeleton", "There Was an Old Woman" (again), "Uncle Einar", and "The Man Upstairs". The adaptation here was straightforward, with the narration of the stories turned directly into voice narration, and the dialogue brought to life by performers and sound effects.

Better work was done on adapting individual stories from The October Country. "The Dwarf" turned up on The Ray Bradbury Theater, in an episode which Ray considered to be one of the worst, but that was one of the few week adaptations of October Country stories. "The Next in Line" has been done well for radio on several occasions, perhaps the best being Brian Sibley's Tales of the Bizarre adaptation for the BBC. And then there is a whole string of stories which, in adaptational terms, are among Bradbury's star turns, all of them having been adapted multiple times: "Skeleton", "The Jar", "The Lake", "Emissary", "Touched With Fire", "The Small Assassin", "The Crowd".

You can read "Touched with Fire" (in its original magazine form "Shopping for Death") at the Maclean's archive, here.

Watch part of Ray's own 1956 TV adaptation of "Touched with Fire" ("Shopping for Death") for Alfred Hitchcock Presents here.

Better still, listen to how "The Next in Line" should be done, in Brian Sibley's dramatisation for BBC Radio's Tales of the Bizarre, here.

The next of my Lockdown Choices will be Bradbury's eighth book: Dandelion Wine.
Posted by Phil at 12:30 pm

thanks, I'm enjoying your posts!

This book is the one for me. My favourite Ray Bradbury all-time and forever. The one I would chose to introduce any novice to his writing. The one that I reread the most. The one with my favourite Bradbury short story (The Lake) - although that is a nearly impossible task. And many in my personal top 10 (ok, ok - maybe top 20) The Crowd, The Wind, The Jar, Skeleton, The Scythe. These stories have all impacted me the deepest and stayed with me the longest.

I even like The Watchful Poker Chip of H. Matisse to be honest. (Just don’t tell Phil.)

I love finding out in these blogs where some of these stories first appeared in publication and their original titles.. Shout out to Canada (Maclean’s) for publishing “Shopping for Death”.