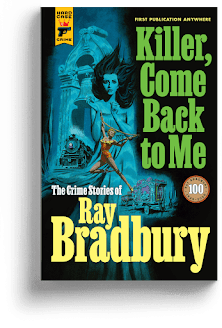 n this week's new episode of Bradbury 100, I'll be talking about the brand-new Ray Bradbury short story collection Killer, Come Back To Me, published by Hard Case Crime.

My guest on the podcast is the man who put the book together, author and editor Charles Ardai.

All of the stories in the new book have been published before, but a couple of them have only appeared in the academic-press Collected Stories series, and a number of others haven't been reprinted since 1984's A Memory of Murder.

Speaking of A Memory of Murder, I have to point out that this new book is not a reprint of that 1980s collection. It does have some overlap - six of its twenty stories appeared in the earlier book. But this is a carefully curated collection which sets out - as its cover subtitle indicates - to present "the crime stories of Ray Bradbury". Which sounds somewhat definitive. And the collection comes close to being that, since it does contain some of Bradbury's very best work in this field.

A few weeks ago, I published the table of contents of Killer, and I think it's worth displaying it again here: 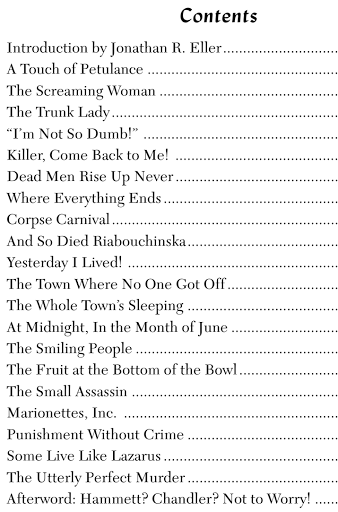 You'll see that there are some quite familiar stories here - "The Small Assassin" and "Marionettes, Inc." are among those which have been reprinted many times. But by mixing the "classics" with the best of the Memory of Murder stories, Killer is able to strike a good balance between the classic stories and the less familiar ones. 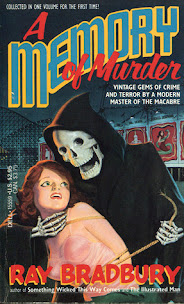 And I'm guessing that some readers will come to this book not specifically because it is Bradbury, but because it is from a well-established publisher of crime fiction.

Anyway, listen to the podcast, and I'll tell you much more about Bradbury's crime fiction, and Charles Ardai will tell us all about the book.

Killer, Come Back To Me is in hardcover in the US. And in the UK, there is a paperback version from HarperCollins:

Order from Amazon US.

Email ThisBlogThis!Share to TwitterShare to FacebookShare to Pinterest
Labels: Ardai, crime, Hard Case Crime, Killer Come Back To Me, Memory of Murder

Hi Phil, there's something wrong with this interview' your questions are silent in the podcast but the answers come through. It's the opposite of the situation with Brian sibley - where his answers don't come though.

Hi Bobby, sorry that you're having trouble listening to these - but in 100% certain there is nothing wrong with the file. I've listened back to it on half a dozen different systems, and I'm not hearing the problem you're hearing! I think there is something wrong with your playback device.

PS: I've just been scrolling through you list of media adaptations and have found one that you may want to comment on.

Good find with Zero Hour! That's an "educational film" directed by Darlenne Chaffee, and one that I've not seen before. I believe there may be a 16mm print of it in the Center for Ray Bradbury Studies, but I'll have to check my notes.

This version on Youtube has obviously been captured very crudely. Somebody has just run a projector and then filmed off the screen with amateur equipment. It's barely watchable!