On this week's Bradbury 100, I talk about Ray Bradbury's long-running TV show, The Ray Bradbury Theatre. And my interview guest is the composer of the theme music for that show, John Massari.

I've often referred to The Ray Bradbury Theatre as Ray's own personal Twilight Zone, and I guess there's some irony in that. Ray did actually write for The Twilight Zone, both the original 1950s/60s version and the 1980s revival. But even if he hadn't written for it, TZ would still have felt quite Bradburyan. There are so many episodes which either take ideas from Bradbury, or situations, or inspiration. And so it shouldn't be too surprising to learn that Bradbury was more than once invited to do his own show. Listen to the podcast, and I'll tell you more about how it came about.

And John Massari - composer for Ray Bradbury Theater and Killer Klowns from Outer Space and Prison Break, to mention just a few - will also let you in on how his music demo ended up being used at the official theme for RBT for the whole seven years. John is pictured below with Ray Bradbury. 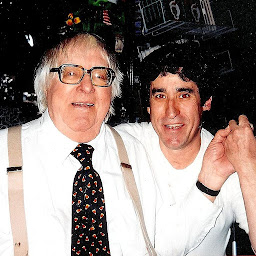 John Massari's music can be found on Soundcloud.

You can also find a lot of his work on his Youtube channel.

Posted by Phil at 8:00 am
Email ThisBlogThis!Share to TwitterShare to FacebookShare to Pinterest
Labels: Bradbury 100, Massari, podcast