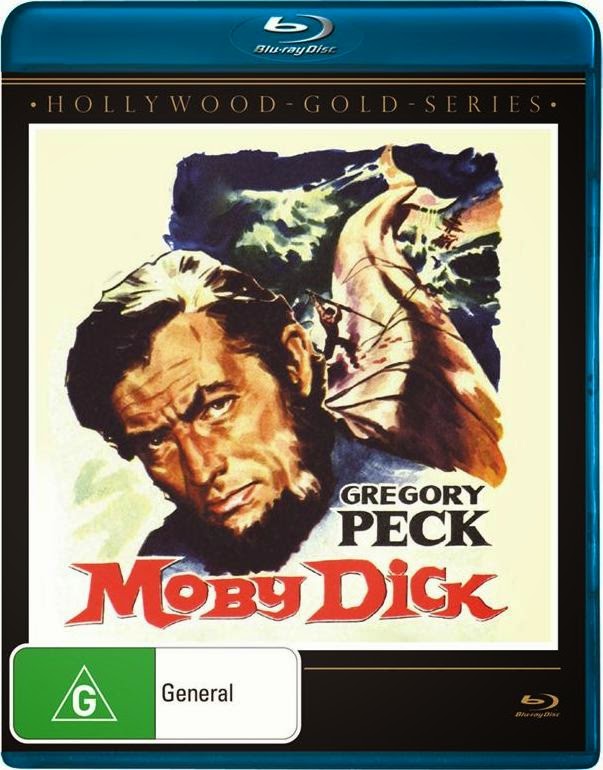 Somehow it passed me by, but back in July a Blu-Ray version of Moby Dick was released - in Australia.

It's officially labelled as "region B", but there are many reports that the disc is actually region-free, which means it should play on any Blu-Ray player, anywhere in the world.

The few brief reviews I have seen indicate that the disc is quite plain, with no special extras, and the transfer is nothing special. It appears that no particular restoration has taken place. However, the Blu-Ray does offer one distinct improvement over the previous commercial releases of the film: it is in the correct 1.66:1 aspect ratio. This means that, for the first time, home viewers can see the full film frame, and not have Oswald Morris' careful compositions wrecked by inconsiderate cropping to a 4:3 frame.
Posted by Phil at 10:52 pm

From what I understand, Twilight Time will be releasing a limited edition run of MOBY DICK with only 3,000 copies later on in 2015. They are pretty good about these kind of releases, even though they are limited.

Excellent news, thanks for letting me know about this.

I am now in possession of the Australian Bluray, and it is the best-loooking version of the film I have seen, but far from perfect. Fingers crossed that the Twilight Time version is better.