It was with sadness that I read that Nard Kordell had passed away. For those who don't know, Nard was a Ray Bradbury fan like no other. He knew Bradbury personally, having first met him in the 1970s, and was the most prolific contributor to the Bradbury message boards.

Although I only barely knew Nard, I had come to know a fair bit about him - from his posts on the official Bradbury message board, and from email exchanges going back about eight years. I met him only once, briefly, two years ago, and was hoping to see him again this year. Unfortunately, time ran out.

I thought I would share a few random happy memories of Nard, so here goes.

There were the occasional items he sent me by post. A VHS tape copy of a rare Bradbury item. A copy of a large format newspaper/fanzine he had created many years before - unlike any fanzine I had ever seen. This was not your average photocopied or duplicated set of pages stapled together, but an honest to goodness newspaper, with proper typesetting, images, the lot, and created in the days before desktop publishing.

I don't recall ever really being able to send Nard anything remotely as interesting in return, except on one occasion. When I visited the Center for Ray Bradbury Studies in Indianapolis last year, I was able to rummage through the Center's file of Bradbury correspondence. In there I found a fan letter Nard had written to Bradbury...from 1963, when Nard was 19. I described it in an email, and Nard was either amused, or amazed, or a mix of both.

Over the years Nard dabbled with the web. He had his own web pages for a time, which included some of his photos of himself with Bradbury. After the site became defunct, he started blogging, and he had a Facebook page. Remnants of these are probably still out there in cyberspace. My favourite Nard web memory, though, was an accidental meeting we had on Second Life. There's a place called Bradburyville on Second Life, set up to celebrate Bradbury's work. One day, by sheer chance, Nard and I were both in there. Our avatars approached, and from his screen name, I guessed that Nard was Nard, so I introduced myself by typing in a greeting. Nard typed a reply. What Nard didn't realise was that his computer's microphone was active, and I could hear his voice as he muttered things like, "Is that Phil? How do I talk to him?"

In 2008, I met Nard in person for the first and only time. I was presenting at the Eaton Conference at the University of California, Riverside. Bradbury was to be there as guest of honour. Nard decided that would be a good opportunity for us to meet, and so we did. I don't honestly remember much of the conversation of that day, but I do have a clear memory of Nard as a smiling, amusing presence, liable to burst into song when somebody said something that suggested a familiar lyric. I also remember that, when Bradbury was becoming physically tired after signing hundreds of books for the lines of people that had come to see him, he asked Nard to find a way of shortening the queue.

All of this is trivia, but these are my only points of direct contact with Nard. And yet he made a big impact. In one of his last emails to me, he wrote of his near-death experience and how it gave him a glimpse of what was to come. Where others might be put in fear by such an experience, Nard was heartened - no, joyous! - because he knew there was something better beyond this life. 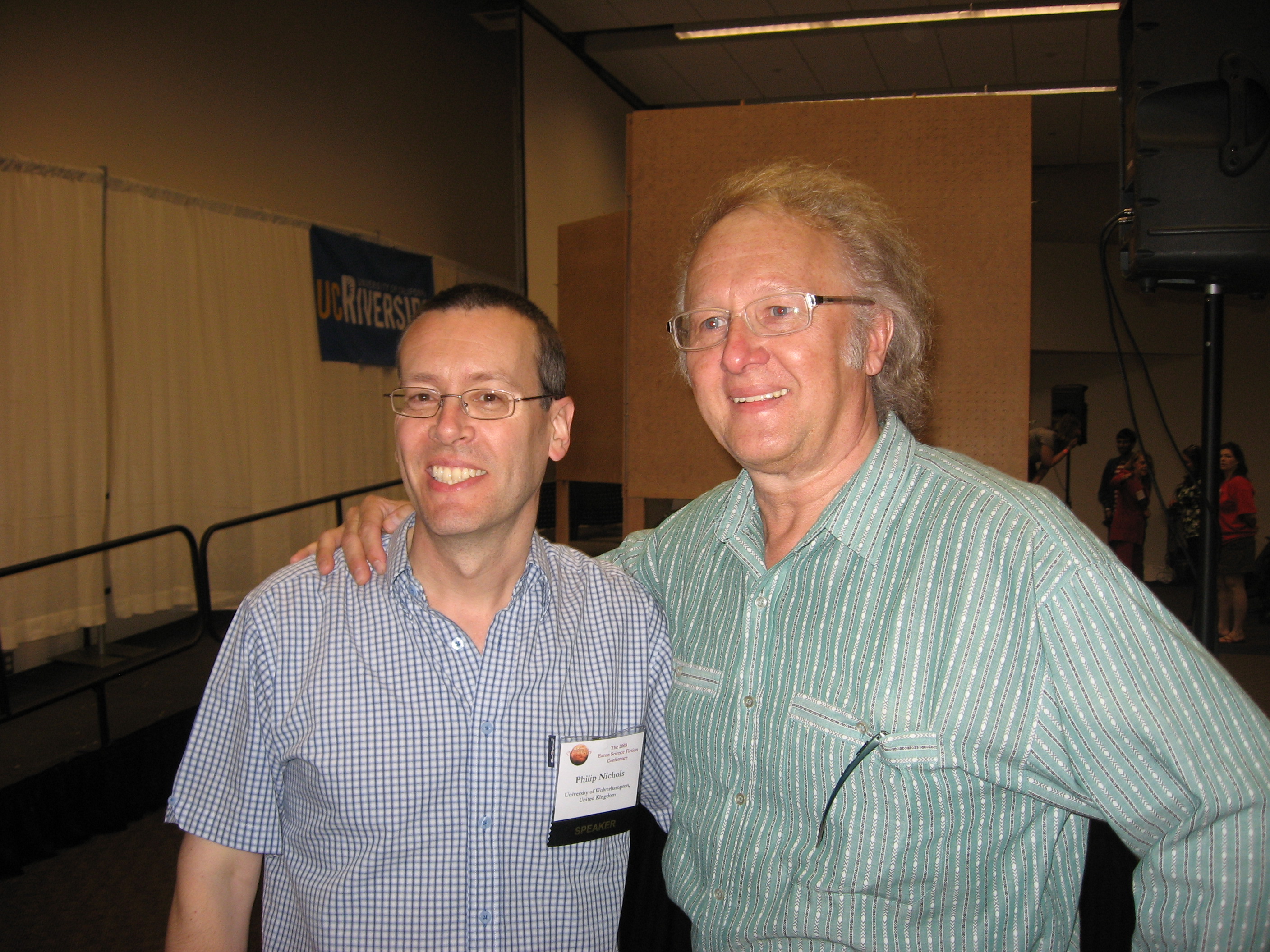 Email ThisBlogThis!Share to TwitterShare to FacebookShare to Pinterest
Labels: Nard

Phil -
I remember Nard from the Eaton Conference too. Wish I had gotten to speak with him more. I a very sad he is no longer with us. Thank you for writing this.
-Patricia R

Nard was an artist as well, working in a medium lent from the printing industry that he had been assocaited with for many years.The ink emulsions merged and swirled and interacted creating some very interesting landscapes and otherwise impressive works. Perhaps his wife would make those available for sale.

Patricia and Michael, thanks for your comments.

I was aware that Nard was an artist, and seem to recall seeing some of his work on the web (but I can't remember where). He's also on Youtube somewhere playing piano.

He was my dad. It is so amazing to see these comments. Please keep the memories coming. It's really nice to see how he's affected others.

I'm so sorry you lost your dad, but pleased that you find these memories interesting. There are more on the Bradbury message board at www.raybradbury.com

Nard claimed that he, or at least his name, was the inspiration for his pal Jay Lynch's "Nard and Pat" underground comic strip.