Thanks to a post I saw on another blog, I have discovered that Time magazine has some of its historical content online. The particular item that drew my attention was this report from 1939 of the first-ever World Science Fiction Convention. This event, held in New York City, was attended by a young Ray Bradbury and some of his Californian friends such as Forry Ackerman.

Time also has a number of old reviews of Bradbury books, the most interesting of which are the older ones, when Bradbury was still establishing a reputation. For example, here is a review of Golden Apples of the Sun from when the book was first published.

And then there is this contemporary review of the 1966 Truffaut film of Fahrenheit 451, which has this to say of Julie Christie:

As for Christie, the picture strongly supports the widely held suspicion that this actress cannot actually act. Though she plays two women of diametrically divergent dispositions, they seem in her portrayal to differ only in their hairdos.

For all Time articles that mention Bradbury, click here. My only gripe is that the older articles are obviously taken from OCR-ed scans of print material, and suffer from occasionally corrupted text.
Posted by Phil at 9:00 am No comments:

In 1960, Ray Bradbury wrote an article for Life magazine on the then new science of SETI, the Search for Extraterrestrial Intelligence. Life's archive is available on Google Books, so you can read the entire article for free here.

Seven years later, another Bradbury article for Life won him an award from the Aviation Space Writers Association. The article "An Impatient Gulliver Above Our Roofs" details Bradbury's impressions of his first visit to the Manned Spacecraft Center in Houston, Texas, and of the Saturn/Apollo Moon programme. The full article, with some beautiful illustrations is here. Bradbury's acceptance speech for the award can be read here.
Posted by Phil at 9:00 am No comments:

It's been a while since I found time to write any reviews of Ray Bradbury Theatre (you can see my overview of the series, and my reviews of episodes here). One of the episodes I haven't written about is "Tyrannosaurus Rex", based on a story which has also appeared in print as "The Prehistoric Producer".

It is undoubtedly one of the low points of the series.

If you want to know why, there is a neat review on the blog That Guy With The Glasses.

If you have never seen Ray Bradbury Theatre, you should be advised that not all the episodes are as awful as this ones sounds! If you want to find out more, you could do worse than buy the DVD set of the series, which is currently available from Amazon for an amazingly low ten dollars.

Over the years, many groups have had the support of Ray Bradbury. One of these is the Southwest Manuscripters Club, which apparently hosted the young Bradbury in 1949, around the time that his first novel The Martian Chronicles was being readied for publication. This article gives an account of Bradbury's connection with the group.

Back in August of last year, I attended Ray Bradbury's 90th birthday party in the Mystery & Imagination Bookshop in Glendale, California. While crowds packed the front of the shop trying to get a glimpse of Ray, in a quiet corner stood a fellow with a pencil and paper, sketching Bradbury from memory. Said fellow, it turns out, was Bill Goodwin.

Bill doesn't know exactly what became of that sketch, but he has more - such as the one below, which I can't help seeing as Ray-as-steam-locomotive. 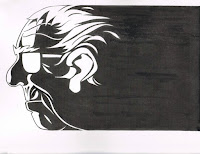 Although Bill can't locate his bookshop sketch, I happened to snatch a few seconds of video of him sketching. So, for your delectation and delight, here it is. To get the best view of the sketch, you may need to pick up your computer screen and rotate it through 90 degrees...

A recent college production of Bradbury's stage version of Fahrenheit 451 in Georgia has received a positive review. The technical aspects of this production sound interesting.

Just in time for St Patrick's Day was Pillar of Fire's production of Bradbury's Irish play Falling Upward in Alabama. Here is the delightful poster from the production. How many of the faces around the edge do you recognise? 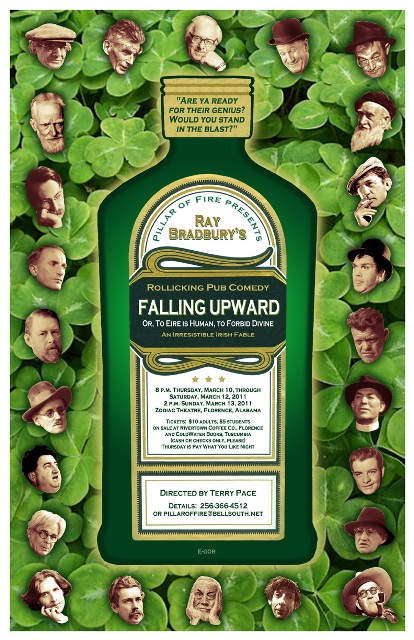 Bradbury's work has appeared in almost all media. One of the oddest items, though, is a short story which appeared in a magazine with an advertisement attached. "The Hour of Ghosts" was first published in Saturday Review on October 25 1969, and has not yet been collected in any of Bradbury's books, although it was anthologised in Peter Haining's Ghost Tour in 1991.

In December 1969, the story was reprinted in Playboy - as a centrefold, no less! This time, the story appeared with an advertising strapline:

In the science fiction of today lie the bits and pieces of tomorrow's reality. A reality that all of us in the Bell system are planning for today. Bell AT&T.

This version of the story can be viewed on Flickr, thanks to Sizemore who uploaded it: part one here, part two here.
Posted by Phil at 8:00 am No comments: 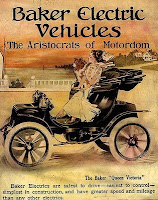 Finally, here's Jay Leno with his own 1909 Baker electric car!
Posted by Phil at 8:00 am No comments: 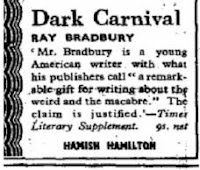 Inspired by Ray? Borrowing From Bradbury

Bradbury has written hundreds of short stories and dozens of books, so it is not surprising that some of his ideas turn up elsewhere. Sometimes it will be plagiarism, as in the case of Playhouse 90's "A Sound of Different Drummers", which stole from Bradbury's Fahrenheit 451. Other times it will be playful homage, such as The Simpsons' passing reference to "A Sound of Thunder" in Time and Punishment.

Here is another case where there is an uncanny resemblance to pre-existing Bradbury material:

21 Jump Street - "Woolly Bullies"
This 80s/90s series, co-created by Stephen J. Cannell, has an episode about bullying. One character recalls his childhood torment at the hand of a bully. Now grown up, in order to put his demons to rest he decides to seek out his former tormentor... and is both surprised and satisfied to discover that the former bully is now a worthless, powerless, low-life. The Bradbury connection? A short story called "The Utterly Perfect Murder" (1971), which has an almost identical denouement.

The entire 21 Jump Street episode is on YouTube. The scenes most closely reflecting Bradbury's story start around 38 minutes in.


Of course, Bradbury's story has that whole "here comes a murder" idea, so it differs from the Jump Street episode - but both stories hang upon that moment of discovery of the pitiful thing that the once powerful bully has become.

Is this plagiarism? Accidental borrowing? Homage?


My thanks to Cori for first alerting me to "Woolly Bullies".
Posted by Phil at 8:00 am No comments:

The always fascinating blog Letters of Note recently posted a 1990s letter from Ray Bradbury. Bradbury was asked about an obstacle in his life that he had overcome. Read the letter - which has been put up for auction - here.

And...yet another stage production of Fahrenheit 451, this one by a school in Savannah, Georgia.
Posted by Phil at 8:00 am No comments: