Another Award for Ray Bradbury 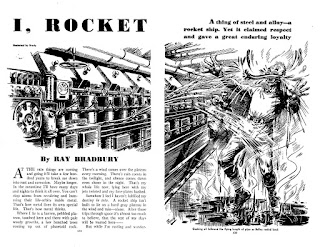 Ray Bradbury has won yet another Retro Hugo Award - for his 1944 short story "I, Rocket".

Like the normal Hugo Awards, winners are decided by a popular vote among the membership of the World Science Fiction Convention, which this year is held in New Zealand. (Well, it's become an online event this year due to Covid, but it's still being run from New Zealand.) The idea behind the Retro Hugos is simple: there were some years in the past where normal Hugos weren't awarded - mostly because of pesky little things like World War 2 getting in the way. The Retro Hugos are designed to plug the gap in the historical record by awarding for those years retroactively.

Of course, the award winners will be distorted by the peculiar selective memories we all have. The only authors who are ever going to win Retro Hugos are famous ones. Any author whose name is lost to the mists of time is just never going to be in with the chance of winning a popular vote.


However, in some cases with the Retro Hugos you will find more than one famous name competing for an award. For the 1944 Retro Hugo voted for this year, famous author Ray Bradbury was up against famous author Isaac Asimov, and three authors whose popularity has probably diminshed over the decades: Clifford D. Simak, Fredric Brown and A.E. Van Vogt.

Surprisingly, Bradbury's "I, Rocket" isn't contained in any of his main short story collections. But you can find a scan of the magazine it originally appeared in way back in May 1944. Click here to read Amazing Stories magazine. 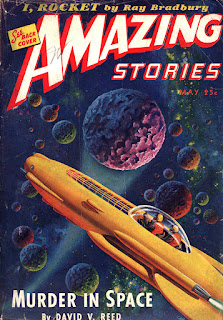 "I, Rocket" isn't actually a bad story. I rather liked the device of a rocket narrating the story of its crew. It just isn't the "correct" winner here.

What a pity that "The Lake" just missed the ballot. It had just as many nominations as "I, Rocket", but after a complicated tiebreak process, "I, Rocket" went through to secure the last spot on the final ballot.