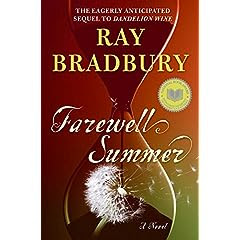 Advanced reviews have started to appear for Ray Bradbury's forthcoming book Farewell Summer. This, you may recall, is his sequel to Dandelion Wine (1957), although most of it was written at the same time as the original novel, and both books were originally conceived by Bradbury as a single novel.

Publisher's Review's text is posted on the Amazon page for the book. Kirkus Review's text is available on their site, but only to paying subscribers. However, over at the Ray Bradbury Message Board, Walloon has posted the Kirkus text. Many thanks, Walloon.

There are some interesting Bradbury-related video clips on YouTube these days. Nard has alerted me to Exposure Three: a short behind-the-scenes feature on the making of The Small Assassin. And then there is this quirky little piece: The Adventures of Ray Bradbury. This is a little comedy that parodies the persona of Bradbury - not so much his fiction or writing style, but his Ray Bradbury Theater persona. Until I saw this, it had never occurred to me that Bradbury was a celebrity capable of being parodied, but I guess he is!

Other Bradbury-related material on YouTube can be found here.
Posted by Phil at 5:39 pm