Ray Bradbury made a brief appearance on KPCC Radio, Pasadena, yesterday for this 86th birthday interview, conducted by Patt Morrison. 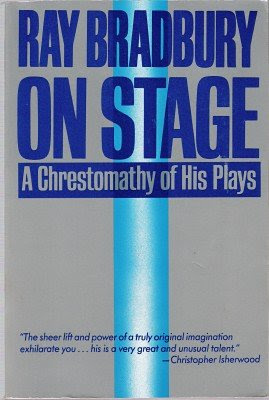 Bradbury is best known for his short stories and novels, but less well known for his poetry and plays. And yet there seems to be a Bradbury play in production somewhere in the world at almost any given moment. I have only actually seen one production, the British premiere of Fahrenheit 451, but have also read a number of other Bradbury plays. If you want to read them just for pleasure, a good starting point is On Stage: A Chrestomathy of His Plays, which combines three earlier play collections (The Anthem Sprinters and Other Antics (1963), The Wonderful Ice Cream Suit and Other Plays (1972), and Pillar of Fire and Other Plays (1975)) into a single volume. This one volume contains the following plays:There are also useful introductions and afterwords to each section.

Some of the plays are remarkable for their economy of staging. "Kaleidoscope", for example, dramatises the last minutes of a crew of astronauts after theirship has been destroyed and they find themselves flung apart in empty space. Bradbury's stage directions call for no scenery. The play begins in darkness, and each astronaut appears, one by one, in a single spotlight against the dark stage. There is no need to show anything else.

Anyone interested in staging a Bradbury production would be well advised to visit the website of Dramatic Publishing. They supply single plays at reasonable prices, and will also manage the licensing arrangements, and publicise productions on their site.

They currently list the following current and imminent productions (to which I have have added links to the theatres or companies staging the shows):