It is with sadness that I report the death of Alan Neal Hubbs, who for many years was the director of Ray Bradbury's stage plays for the Pandemonium Theatre Company. 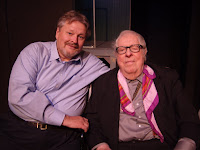 I met Alan briefly last year at Ray's 90th birthday party. I recognised him from photos I'd seen on the web, so I approached him and said, "Are you Alan Neal Hubbs?" He looked puzzled, then his face took on a broad smile as I told him that I had never met him before, never seen any of his plays, but I had been following his work from the UK, and posting about it on the web.

He may have been thinking that I was a lunatic stalker, but he reacted with genuine humility. Shortly afterwards, Alan was among the many party guests who took to the microphone to toast Ray Bradbury.

I can't claim to know a great deal of Alan's life story, but I have pieced together information from various sources to give the broad brush strokes of his career. He was a student of theatre at the University of Southern California in the late 1960s. His interest in Bradbury was evident here: he reported that his first Bradbury production was undertaken in 1967, and his first official association with the author was in a 1970 staging of The Martian Chronicles.

It was at USC that he worked with John Blankenchip, the founder of Festival Theatre USC-USA, a group of students and alumni that performed at the Edinburgh Festival Fringe, and toured elsewhere in Europe - London, Amsterdam, Paris, Berlin. Alan joined the group, and spent much of his time in Europe, only returning to the US in the early 2000s.

Alan's work in Edinburgh included various acting roles, as well as directing, designing and writing. As a director, he took charge of productions that included Tennessee Williams' A Perfect Analysis Given by a Parrot (1969) and Edward Albee's Seascape (1979). He was the writer and lyricist of Revue U.S. (1979). Other European productions he was involved with included the European premiere of Bradbury's The Martian Chronicles in 1975, and the world premiere of Something Wicked This Way Comes in 1994.

Alan returned to the US in late 2001, and soon joined director Charles Rome Smith as a member of Ray Bradbury's Pandemonium Theatre company. When Smith passed away, Alan took on the role of artistic director for the company. His first Pandemonium production as director was October 2003's Something Wicked This Way Comes, presented in Santa Monica. The review at Curtain Up.com said that "Hubbs...finds the mystery and theatricality in the play".

Not all of the Pandemonium Productions would hit the right note, if the critics are to be believed. In September 2007 Alan directed Dandelion Wine, which is possibly one of Bradbury's most difficult plays to pull off. The play is a peculiar mix of quaint small-town America with a mournful twist that is largely original to the play (and absent in the novel the play is derived from). According to one review in the Pasadena Weekly, Alan "allowed some of the syrup of the piece to obscure a sense of foreboding that lies at the heart of Dandelion Wine. Bradbury’s adaptation of his own work is extremely subtle in introducing that undercurrent; so much so that it is almost lost in the minutia of stage life, a circumstance to which Hubbs contributes."

One of Alan's greatest successes was Fahrenheit 451, which he directed in 2008. This is another tough play, which seems to demand great control over both the nuances of performance and the integration of technology, such as Bradbury's famous wallscreen TVs, seashell earphones - and the Mechanical Hound. According to Backstage.com, Alan got the balance right: "Hubbs' clever staging and focus never overshadows Bradbury's substance." Among his innovations was fleshing out "The Mildred Show" with an all-seeing projected announcer that dominated the stage.

In an 2008 interview about this production, Alan spoke of the importance of ensemble players in Bradbury plays, most of which seem to have a large cast. He also draw on his experience of British and American audiences, arguing that Americans go to watch a play, while Europeans go to hear a play. Bradbury, he claimed, dramatised Fahrenheit 451 in a mid-Atlantic mode, and it is important to listen to what the characters have to say perhaps more than paying attention to the technical details - details which he had evidently taken great care to get right.

Among Alan's other successes were:

Yestermorrows (2009) - "impeccably directed by Alan Neal Hubbs… as always a flawless cast has been chosen," according to The Tolucan Times.

The Wonderful Ice Cream Suit (2009) - "The fracas that results is a slow-motion hoot, realized by director Alan Neal Hubbs...and the cast to the hilt," according to the Los Angeles Times.

Ray Bradbury is one of the few writers to have maintained his own production company, and that company has been blessed by a loyal ensemble of players and a series of reliable, creative directors. I met Alan Neal Hubbs only once, and the encounter lasted mere minutes. Regrettably, I never did get to see one of his productions. But there is no doubt that his creative contribution to the longevity of Bradbury's stage works is significant, and should be remembered and celebrated.

To end this post, here are some opportunities to hear Alan Neal Hubbs:

First is this 2008 audio interview from Hollywood 2020, in which he discusses how he came to work with Bradbury, and details the complexity of directing Fahrenheit 451.

Second, here is Alan on video, on stage at the Fremont Center introducing Ray Bradbury to the audience who have assembled to watch The Invisible Boy:

I knew Alan from USC where I was taking classes from John Blankenchip. That theatre crew included; Stephen Stucker, Norma Pisar, Alan Hubbs, Charmaine Mancil, John Rose. Alan was riot as Dimitre Weisman in JB's "Follies" pre-Edinburgh. Many of those listed above ore onstage "up there" now - our loss. The onoes still here give us great joy still. RIP ALAN! Tony Marando

I had the absolute pleasure of working with Alan in Edinburgh. We were in Cat on a Hot Tin Roof together where I was Big Daddy's Big Mama. I learned so much from him!! He had a heart of gold. He had a wit that was unmatched and a laugh that resonated and stayed with you. I hear it today and my heart sings. He will be missed! I am sure that he and John are plotting some type of theatrics together wherever they are. RIP, Alan. Ingrid Jochems Holzman

It is with sadness that I read that our Alan is no longer with us. Alan became a very dear friend when he cast me in USC's "Martian Chronicles" when Alan was doing his MFA and I was a freshman under Professor John Blankenchip's guidance. I remember having post-midnight dinners with Alan and Kevin Tighe after rehearsals.

Surely Alan is keeping the devis and devas in stitches in the Beyond. Normandie Singh Reill
www.cheznormandie.blogspot.com