Where Does A Widow Walk? 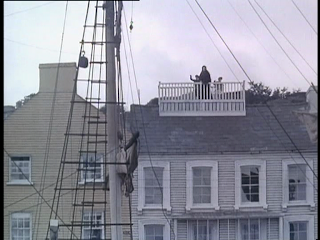 In Ray Bradbury's screenplay for Moby Dick (1956), there are some elaborate camera "leaps" when the Pequod is setting sail. First mate Starbuck looks across the harbour, and then we take a series of jumps - just cuts really, but Bradbury describes them as "steps" - to get closer to Starbuck's wife.

First we see her as a figure standing on a "widow's walk". Then, closer, as a solitary figure dressed in black, her dress fluttering in the wind. Then, closer still, we are looking over her shoulder out to sea. In the far distance is Starbuck aboard the Pequod.

Then the camera reverses its series of steps, back to Starbuck's point-of-view.

The sequence helps to humanise Starbuck, which is part of Bradbury's grand plan for the screenplay. It serves to set him apart from the rest of the crew - whose wives, mothers and significant others hang around on the quayside. And it acts as an ill omen: she's dressed funereally,and stands on a widow's walk.

Director John Huston found no use for this sequence, and so in the finished film we just get a shot of Starbuck looking up and off, a cut to a distant shot of his wife and family, and then a cut back to Starbuck.

In fact, the shot is so brief - and the figures quite indistinct when viewed on DVD, and the shot slightly cluttered by the mast and rigging in the foreground - that I have never really registered what we are looking at.

It's only when reading Bradbury's screenplay that I realised that the strange fenced-off area we see sitting on top of that distant roof is a "widow's walk".  Apparently, they are a common feature of coastal architecture in North America, although the idea that they are primarily for looking out to sea maybe a myth: as John Ciardi reported on NPR in 2006, they were usually constructed around chimneys, and were more likely used to help put out chimney fires.

The widow's walk shown in Moby Dick doesn't seem to be built around a chimney, unless it's a tiny chimney. It looks as if it was added to a building specifically to give Mrs Starbuck and kids somewhere to stand while they wave daddy Starbuck off.

Even without using Bradbury's conception for this scene, Huston still managed to get a sense of foreboding and dread, by making the other wives look as miserable as sin: 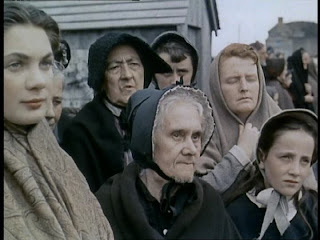 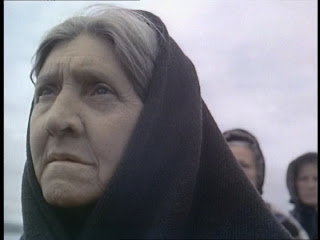 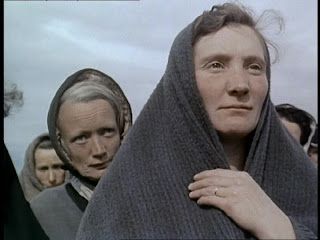