Bradbury isn't the only Ray to reach the age of 90 this year. His lifelong friend Ray Harryhausen is also 90, and has just marked the occasion with a tribute evening at the British Film Institute. The event was hosted by John Landis, and included tributes from a host of Hollywood luminaries.

Even Bradbury put in an appearance, in a specially recorded video tribute.

I didn't attend the event, but I feel as if I was there thanks to this account of the festivities. Harryhausen's associate Arnold Kunert adds a lengthy comment clarifying the Bradbury-Harryhausen relationship.
Posted by Phil at 9:00 am 2 comments:

That excellent blog for all things Mars-related, Marooned - Science Fiction, Fantasy & Horror Books on Mars, is embarking on a story-by-story exploration of the "new" materials in The Martian Chronicles: the complete edition, recently published by Subterranean and PS (and already sold out). It's something I should be doing for my own website, but alas I don't have time at the moment.

Marooned also alerts us to this LA Times blog post, which says that the film rights to The Martian Chronicles have been newly optioned. Of course, this doesn't mean there will actually be a new film. The Chronicles has been optioned countless times, and Bradbury himself has written at least four different screenplay versions over the years. There's no indication yet that this new option will be any different. Fingers crossed, though...
Posted by Phil at 9:00 am 1 comment:

According to this article, Ray Bradbury's Pandemonium Theatre Company has stopped running. Although the company has been playing to packed houses, it sounds as if ticket sales were not enough to keep the shows going. We can only hope that this is a temporary state of affairs, as there is no doubt that having his own theatre company has enabled Bradbury to do some unique work.

Meanwhile, reviews are beginning to appear for Sam Weller's forthcoming book Listen to the Echoes. This is a collection of transcribed interviews, originally conducted when Weller was researching for his authorised biography of Bradbury. One such review is this one from the Chicago Tribune. The publisher's page for the book is here, and Weller's new blog is here. (I wonder if he knows that the 'comments' feature of the blog is broken...)

File under "how did I miss that?": Tor.com has been serializing Tim Hamilton's graphic novel version of Fahrenheit 451. Click these links to see each part:

Written By, painted by

The Writer's Guild of America West has a magazine called Written By. The latest issue has an article on Ray Bradbury, and a delightful caricature of Bradbury on the cover, created by artist Lou Romano. It also contains the first appearance of Bradbury's short story "The Dog in the Red Bandana".

I wouldn't say the article reveals anything new, but it does give a good, clear account of Bradbury's life and work, and is beatifully illustrated with some good photos, paintings and book cover art.

The full issue is now available to view online, or for download as a PDF.

Lou Romano gives a good account of how his artwork came into being, with lots of preliminary sketches and variants of the finished piece. Lou's blog post is here.

Another Pixar artist, Glenn Kim, has been working on some Bradbury-inspired imagery for Steven Paul Leiva's challenge to create artwork for Bradbury's 90th birthday. See Kim's Fahrenheit 451 imagery here.
Posted by Phil at 8:29 am No comments: 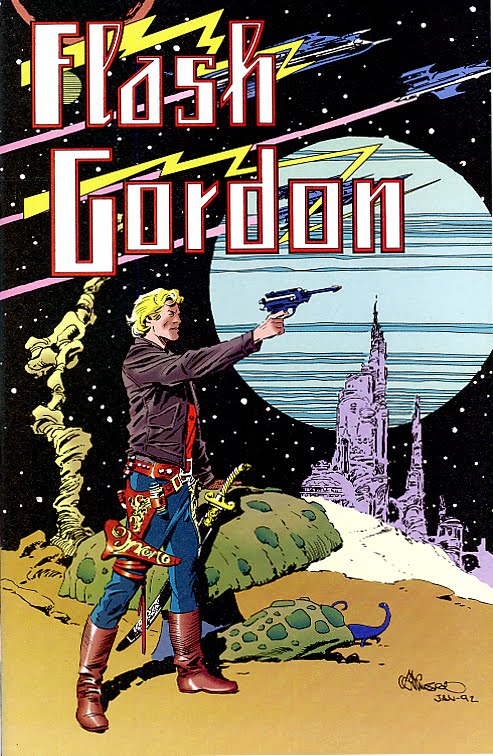 You have probably heard by now that Al Williamson has passed away. Williamson was a legendary comic artist who first came to prominence through EC Comics, which is where he did some great work with adaptations of Ray Bradbury stories.

If you do a Google search, you will find plenty of obituaries of Williamson, but I found this one the most interesting because it is full of illustrations chosen from across Williamson's career. There's even a Bradbury in there.

Over on Ballardian.com is an essay by James Pardey on J.G.Ballard's early SF novels and illustrator David Pelham. It includes Ballard's thoughts on Ray Bradbury as a pioneer of "inner space", a label which is frequently attached to Ballard's own works.

And finally... Fahrenheit 451-style book-burning in the age of the iPad... I've seen (but didn't understand) the Russian TV miniseries based on Dandelion Wine.

But I've never heard of a Dandelion Wine wedding.

And if that wasn't weird enough, here's a video for a song called "Bradbury", performed by an Argentinian band. Look out for Bradbury's face!

There are some potentially interesting materials to help with the use of Fahrenheit 451 in the classroom at the website Shmoop, here. Some parts of it are unlockable only by paying money, but other parts are free. From a cursory glance, it's not clear to me what age range they are assuming, but it may be useful to some teachers.


I gave up watching the TV series Lost a couple of years ago, and have been amused at the amount of blogosphere coverage the series finale has garnered. I was more amused by this Los Angeles Times review which suggested how Ray Bradbury might have enlivened proceedings...

I finally received my copy of The Martian Chronicles: the Complete Edition. This large volume from Subterranean Press collects (supposedly) all of Bradbury's Mars stories, both the ones from the original Martian Chronicles and the ones that were published elsewhere. It also includes two complete Bradbury screenplay adaptations of the book. For my research into Bradbury's media work, this volume is a godsend; previously I had to make a trek to Indianapolis to inspect Bradbury's screenplays at the Center for Ray Bradbury Studies.

I said "supposedly" above, not to question the editorial completeness of the Subterranean volume, but simply because I expect Bradbury has some more Martian tales lying around somewhere.

The Martian Chronicles: the Complete Edition is a handsome book, but there is little point in me trying to persuade you to save up to buy a copy... because it's already sold out!
Posted by Phil at 10:00 am 3 comments:

With a plot that sounds as unlikely as Bradbury's A Graveyard for Lunatics, Dwight Kemper's Who Framed Boris Karloff casts the legendary horror icon as a murder suspect. And, according to an interview with the author on the blog A Lone Fan Crying in the Wilderness, Karloff is not alone in being a real person cast into a work of fiction.

Apparently, Forry Ackerman is a character in the story as well.

Another blogger, Justin Parpan, has risen to Steven Paul Leiva's challenge of producing artwork inspired by Bradbury stories (for Leiva's planned 90th birthday book gift to Bradbury). Justin has produced some cartoony illustrations for a number of short stories and books. I particularly like his take on "Skeleton". See Justin's artwork here.

Finally, here's a positive review of a recent Palo Alto children's theatre production of Bradbury's stage play version of Fahrenheit 451.
Posted by Phil at 10:00 am No comments:

A couple of weeks ago I stumbled on the British website Good Show, Sir! which collects - parades might be a more appropriate word - the most laughable examples of science fiction and fantasy book cover art. Unicorns, cat people, bare-breasted ladies... and centaurs... seem to be among the most frequent visual elements on display there.

I took a look over my shelves to see which book covers I could offer to the site, and came up with an awful Bradbury cover, plus a few others. Little did I know that the 1969 British Corgi paperback edition of I Sing the Body Electric! would end up being the highest rated cover on the whole site.

Click here to see the cover, and the witty responses it garnered from the site's visitors.

I also posted this Harlan Ellison cover, which prompted a response from Mr Ellison himself.
Posted by Phil at 10:00 am No comments:

Email ThisBlogThis!Share to TwitterShare to FacebookShare to Pinterest
Labels: art, Ellison, I Sing The Body Electric Ray Bradbury has only rarely edited anthologies. The best known is probably Timeless Stories for Today and Tomorrow. There is a brief (and anonymous) review of the book here.

According to a Laguna Beach (California) website, Bradbury's stage musical 2116 will be heading to the Edinburgh Festival Fringe this year - although presumably only if this fundraising event is a success...
Posted by Phil at 10:00 am No comments: